Out of the Snakepit, Parts 1 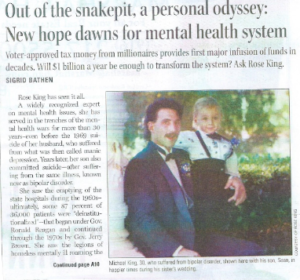 Rose King has seen it all.

A widely recognized expert on mental health issues, she has served in the trenches of the mental health wars for more than 30 years–even before the 1969 suicide of her husband, who suffered from what was then called manic depression. Years later, her son also committed suicide—after suffering from the same illness, known now as bipolar disorder.

She saw the emptying of the state hospitals during the 1960s–ultimately, some 87 percent of 36,000 patients were “deinstitutionalized”–that began under Gov. Ronald Reagan and continued through the 1970s by Gov. Jerry Brown. She saw the legions of homeless mentally ill roaming the streets, passing through temporary shelters and jails, victims of the state’s failure to pay for community mental health care as promised when the state hospitals were shuttered.

She saw families struggling with health insurers and public mental health programs to get help from a failed system plagued by lack of money, understaffing and disorganized services. The hard lesson learned: Care is often available to the mentally ill only when they are in a state of severe crisis.

“It hasn’t really changed since my husband became ill,” says King, who lives in East Sacramento. “It remains crisis-driven, crisis-perpetuating and fragmented.”

“We turn mental health clients away and tell them to return when their symptoms are so severe and persistent that they cannot meet their own needs, and may no longer even recognize that they need care,” the Little Hoover Commission noted in a 2000 report.

But last year, voters approved Proposition 63, the landmark mental-health initiative that taxes the wealthy at 1 percent of all income over $1 million. That means Californians will now see the first major infusion of money into mental health care in decades—an estimated $1 billion a year, specifically for community mental health care.

King and other activists hope that the money will transform the wretched conditions that blight urban streets and consign millions of afflicted Californians and their families to lives of poverty and desperation.

But the story of Rose King and her family is not just a story of the struggle for mental health care. It is the story of a system so flawed that it harms the very people it is supposed to protect.

Rose and Joseph King first sought help from their health insurer–Kaiser–as Joseph began to experience frightening symptoms of depression and paranoia in 1968. Joseph “saw the doctor who had treated him for asthma, and was told there was no psychiatrist on staff in Sacramento,” Rose recalled. An urban planner who worked for regional planning agencies in California and Alaska, Joseph soon became so disturbed that he could no longer work.

Desperate, they drove to DeWitt State Hospital in Auburn–which was in the process of closing.

“They wouldn’t accept him at DeWitt,” she said. “He didn’t look ill, and they said he ‘didn’t meet their criteria.’ We had no idea where to go.” He was finally admitted “for a couple of weeks” to a mental health clinic run by Sacramento County, where his wife said he was seen by a psychiatrist twice, and sent home on a weekend pass. That night in 1969, at age 36, Joseph King killed himself.

Grief-stricken and now a single mother to 8-year-old twins and their 6-year-old sister, King, who had been a homemaker and volunteer political activist, went back to college, earning a Bachelor’s in government-journalism at California State University, Sacramento, and a Master’s in journalism at the University of California-Berkeley.

She interned in the Capitol for Democratic Sens. George Moscone and Mervyn Dymally, and worked for $25 a week in the unsuccessful 1970 gubernatorial campaign of Assembly Speaker Jess Unruh. She later worked in paid jobs for a succession of powerful Democratic legislators–including Assembly Speaker and Lt. Gov. Leo McCarthy, Senate Leader David Roberti and Assembly Speaker Antonio Villaraigosa.

But her first introduction to mental health issues had been in 1967, the year before her husband became ill, when she ran an unsuccessful but well-publicized campaign to recall Reagan, in which many of the core activists were medical and psychiatric workers infuriated by conditions for the mentally ill.

As she became more involved in the issue, she pressed politicians, pollsters and the media to lift the heavy curtain of ignorance and stigma that has long surrounded mental health policy. She helped staff a statewide task force on mental health issues under McCarthy when she was his chief of staff in the lieutenant governor’s office.

“Nobody even asked what public opinion was on the subject,” she says. “I asked Mervin Field to start putting [questions about mental health] in his surveys, and there were two statewide polls done for the [Senate] Rules Committee when I was working for Roberti in the 1980s. The importance of the subject of mental health to citizens was first in one poll, second in the other.”

In 1984, her 23-year-old son Michael was diagnosed with bipolar disorder, which is often hereditary and can surface with frightening symptoms in late adolescence or early adulthood. Years later, after battling the disease for nearly two decades, Michael committee suicde. He was 42 years old.

In 1990, King worked on an initiative to raise the alcohol tax to fund mental health care.

“It was unsuccessful, but not because people didn’t think something should be done about mental health,” she says. She was chief consultant to the Joint Legislative Committee on Mental Health Reform convened by Senate Leader John Burton in 2000 and co-chaired by former Assemblywoman Helen Thomson, author of numerous mental health measures over the years and a former psychiatric nurse who is now a Yolo County Supervisor. Thomson was termed-out of the Legislature in 2002, and King, who was principal consultant to the Assembly Health Committee that Thomson chaired, retired the same year.

King’s oldest daughter, Michael’s twin sister, does not have the condition, says King, but her youngest daughter was diagnosed with bipolar disorder at age 30, following childbirth, which can be a “trigger” for emergence of the disease. King’s youngest daughter, now 43, a college graduate with two degrees earned before the onset of the disease, “manages her condition quite well and works in her profession,” her mother says.

Recently, a teen-age grandchild has shown symptoms of the disease, and the 66-year-old King once again finds herself in the mental health trenches, seeking help from a still-fragmented system of mental health care that has bedeviled California families like the Kings for decades.

As California gears up to put Proposition 63 into effect, former Assemblyman Darrell Steinberg, who authored the measure, King and other supporters are carefully following its progress.

“I’m hopeful,” King says of the flawed, crowded mental health care system. “It’s not like we don’t know what works or what needs to be done…It’s not unusual for a case manager to have a caseload of 120, all people in crisis.”

She adds: “The system today is really no better than it was in the late 60s when my husband became ill.”

Next week: The devil is in the details: putting the voters’ will into effect.